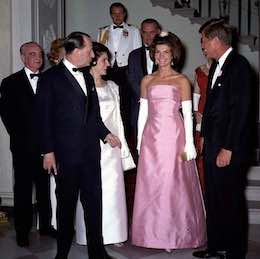 The minute that Jacqueline Kennedy entered the role of First Lady (a term she wasn’t fond of) after her husband, John F. Kennedy, was sworn in on January 20, 1961, she began to turn the White House into a home. She redecorated the staterooms, created a guidebook to the house and its history for those she invited over, held tea parties for her family and close friends, and, most importantly, created a comfortable and inviting environment in a building known for having a rather stiff, formal interior. Not only did she make White House visitors, whether tourists or state dinner attendees, feel adored and appreciated, she gave them the chance to network, to learn, and to leave full of good food, great conversation, and a joyful spirit.

Above, we look back at Kennedy’s most memorable entertaining moments, and below, in honor of her birthday, on July 28, a few of the many things that she taught the world about being a truly gracious hostess.

Have a well-stocked bar.
Mrs. Kennedy started the trend of having a proper, well-stocked bar located in the State Dining Room. There were butlers who acted as bartenders and ashtrays for smoking—something that was previously rarely done in the White House quarters.
Create a casual, comfortable environment.
Where the rooms in the White House were meant to be showpieces rather than gathering areas, the first lady gave them new life. She lit all the fireplaces when guests came by in the winter, nixed the idea of a receiving line at formal affairs, and was thoughtful of her flower arrangements, making them look natural and rustic and not like they came from an expensive florist. Mrs. Kennedy also started the tradition of inviting the men and women to have coffee together after dinner, when historically they’d retire to separate rooms.

Be mindful of the menu.
Though she didn’t have to, Mrs. Kennedy would always consider the price of certain foods and whether or not they were in season and readily available. She instructed the White House chef to serve only four courses instead of the traditional five to six, and she tailored the menu to the cultures and personal preferences of her guests.

Set a simple, well-composed table.
Mrs. Kennedy was adamant about creating a tablescape that was not too fussy or overdone. She never used bread-and-butter plates but did set the table with individual salt dishes, nut dishes, an urn of cigarettes, and matches. Each plate was decorated with a folded white napkin and a simple place card on top. She also typically used vermeil instead of silver for the table service.

Consider traveling with Just Ladies Traveling!  Interested in registering for a trip?  Call  (336) 275-1010 or complete our contact form and we will reach out to you.