*** Our guide is aware that this is a children’s trip and will adapt descriptions for children. 10 years of age is our recommendation for guests.

Arrive in Rome and transfer to your hotel, listed above.
04:00 PM – We will meet our guide in the lobby and enjoy a three-hour walking and tasting tour of different parts of Rome.

Savor the best of Rome while enjoying this “BUONISSIMO” tasting walking tour! Followed by a food-loving local expert, explore some of Rome’s most stunning areas, filled with both culture and foodie attractions.

Discover the tasty side of Rome in the local neighborhoods of the city: the Jewish Ghetto and its famous artichokes, then Trastevere district where you can taste bruschetta( and gram can have a glass of wine) and one of the best gelato(ice cream but better!!) in town! A relaxing walking tour where food mixes with culture! Buonissimo!
Very important: please let us know if you have any dietary restrictions, allergies or special considerations.

A perfect introduction to your stay in this fascinating city, you will learn about Rome as Italy’s political capital, its importance as the cradle of Catholicism, and its place at the heart of the ancient world. The tour starts in the Piazza Navona, one of the most famous squares in Rome. It takes its shape from the 1st century AD Stadium of Domitian, once home to chariot races and it could even be flooded to recreate naval battles. Traces of the original walls remain, but the square was completely transformed in the 17th century, with Borromini designing the façade of the main church, Sant’agnese in Agone, and Bernini creating the famous Fountain of the Four Rivers. A short walk will bring you to the Pantheon, the most complete ancient Roman building, and surpassing St. Peter’s, its dome remained the largest free-standing dome in the world until 1960. The reason for its incredible state of preservation is that in 609AD, it became a church and has therefore been continuously maintained ever since. It is the burial place of Raphael and the first kings of a united Italy. The next stop is the Trevi Fountain, an essential port of call so that you can throw your coins to ensure a return to Rome. From here to the equally famous Spanish steps; other than the fact that they lead to the Spanish embassy, nothing to do with Spain.

Lunch will be your own choice and the restaurants and pizza places with gelato are abundant.

This afternoon we will offer an optional train ride out to a town in ruins – much like Pompeii for those interested.

We will visit and get to enter The Vatican Museums before the official opening, at 8.00 AM! Take advantage of the head start on the general public for a 4-hour private guided walking tour of Vatican Museums, the Sistine Chapel, and St. Peter’s Basilica.

One-way private car transfer by 4 minivans, NO-line entrance fees for Vatican Museums, and earphones are included. Arrive at 7.45 AM at the Vatican, when the Museums are still closed…You are ready to start an early-morning tour of the Vatican Museums, quite simply, the largest, richest, and most splendid museum in the world. You will pass through the room after room full of treasures, before the culmination of the visit, Michelangelo’s Sistine Chapel, home to the conclave that elects Popes. The ceiling frescoes and Last Judgement on the altar wall are probably the most viewed paintings in the world.

After breakfast – served in the Pine Courtyard – enter St Peter’s Basilica, one of the largest churches in the world and a triumph of Renaissance architecture, the work of Bramante, Michelangelo, Carlo Maderno, and Gian Lorenzo Bernini. Once inside, having gotten over the feelings of awe inspired by the sheer size and magnificence of it all, one of the first things you will see is Michelangelo’s ‘Pieta’. Sculpted at the age of 23, it must be the most moving of all Michelangelo’s sculptures; a mother gazing lovingly at her child as if seeing the baby she gave birth to but in fact the body of the 33-year-old Christ. Moving down the church, you will pass the statue of St Peter, whose bronze toes have been completely worn away by the millions of pilgrims who have stroked them and arrived at Bernini’s Baldacchino.

Today, you will get to explore the splendors of ancient Rome. Every city throughout the Empire had a forum at its heart and it goes without saying that the Forum of Rome itself was the mightiest. It was the center of public life, the culmination point for triumphal processions, where courts would sit and senators debate. You will see the Rostra from which Mark Anthony probably made the famous speech on the death of Julius Caesar.

You will get to walk along the Via Sacra (Sacred Way), the main street of ancient Rome, and see the beautiful gardens of the House of the Vestal Virgins, before wending your way up the Palatine Hill, the most central of Rome’s seven hills. From here, you will get an incredible view of the Circus Maximus, where spectacular chariot races took place. The tour culminates at the Colosseum, perhaps Rome’s most awe-inspiring ancient monument. Built by Emperor Vespasian in 72AD, the Colosseum seated about 50,000 spectators and staged all the most blood-thirsty games known to ancient Romans; gladiatorial combat, man against beast, beast against the beast, land battles, sea battles

If you’re looking for an in-depth, authentic Roman experience…Well, don’t look any further! Don’t miss the opportunity to participate in this exciting private class, where we will teach you how to excel at the most traditional Italian specialties, pasta, and Cannoli! You’ll learn how to make fresh hand-made pasta – like fettuccine or ravioli Agnolini – using recipes that you can easily reproduce at home. The dinner ends with one of Sicily’s – as well as Italy’s – best-known desserts, the Cannolo, made of a delicious pastry shell filled with sweetened whipped ricotta, candied citron, and grated chocolate!

The class will last around 3 hours. All tastings, soft drinks, and water are included.
This hands-on lesson lasts about three hours, during which you will learn how to prepare both pasta and Cannoli! You’ll discover the secrets of making the perfect dough, before learning how to craft different types of pasta shapes. You’ll then get to learn which sauces complement which pasta shape – not everything works with just tomato. At the end of the course, you will of course get to taste all the yummy dishes. Our Italian cooking lesson must be in two sessions. One group in the morning and one group in the late afternoon.

We will depart via vans for the airport and our return home! Our transfer time will be based on the earliest departure back to the US.

Hotel for five nights
Breakfast daily
Porterage and taxes (except city tax on departure)
All tours listed
Guides and entrance fees
Guide for children
Transportation to the Vatican for an early visit. (In the case of an event that would change the structure of the Catholic Church, and occupancy of the Vatican – all visits will be canceled)
Cooking class
Departure Transfer to airport
Adventures and Cultures, Inc. – Just Ladies Traveling escorts will be on this trip, Meredith Scott and Liddy Nelligan

Valid US Passport needed for this trip for 6 months from return date.
No Covid restrictions at this time
US State Department and National Health Regulations will be followed rigidly.
14 Participants must sign up for this trip to operate. 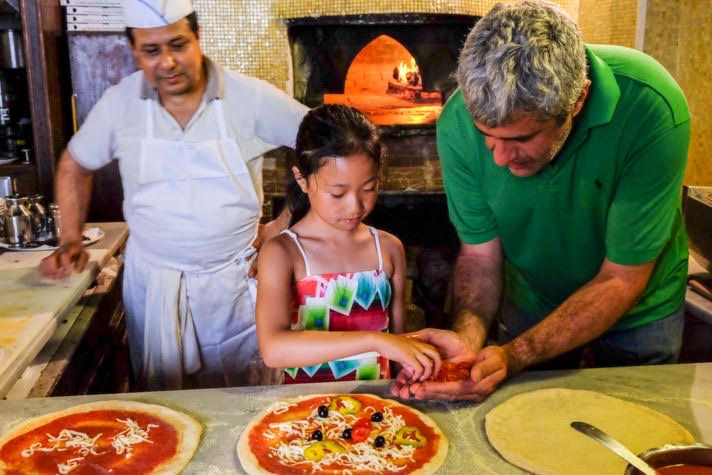