DUE TO SEVERAL REQUESTS, THIS TRIP WILL BE CO-ED
Just Ladies and Spouses, boyfriends and partners, welcome!

September 21 – Depart US for Verona Italy. We recommend Lufthansa Airlines which will allow
you to fly directly into Verona and out of Venice from Charlotte, connecting both ways in Munich.
We will offer a group fare of approximately $1000 round trip if 10 or more are interested in flying
roundtrip from Charlotte. Lufthansa also flies from Atlanta and Washington Dulles and other
major airports. Other airlines also fly into Verona, connecting, in another European capital such as
Rome or Paris.

September 22 – Arrive Verona and transfer to our hotel, the beautiful and famous Due Torri.
www.duetorri.com
Later in the afternoon, we will meet our private guide to visit the beautiful city center of Verona:
the enchanting city of lovers, with idyllic streets, squares, and magnificent Roman ruins. The city is
timeless and unhindered. Plaza Erbe is named after Verona’s old herb market. In the center rests a
large, beautifully medieval fountain with men’s faces etched in it. Today stalls sell everything from
herbs, to wild mushrooms, to fruit, to amazing vegetables. Included in our walking tour will be the
beautiful garden, not to be missed, Giardino Giusti.
September is the month for the collection of rice, which is one of the typical products of the
area. Tonight, we will have a superb risotto in one of the enchanting osterie of the city center. This
will also offer us to get an opportunity to taste the wine production of the area of Verona Hills
(Valpolicella and Amarone in particular) that is so well paired with risotto.

September 23 – After breakfast, get ready for a full day at the Lake Garda: Italy’s largest lake. The
first stop will be Sirmione with its famous 13th Century Scagilero castle, the only castle in the
world with its own port. From there, we’ll travel by private boat over Garda’s crystal waters,
admiring the beauty of the small charming village along the coast. After lunch in Punta San Vigilio,
we’ll disembark in Bardolino, famous for its wines. Quick free time before to come back to Verona.

September 24 – Valpolicella is among Italy’s most ancient wine regions. Research shows that the
locals started producing wine 600 years B.C. (here the history of Valpolicella). During the Roman
period, the viticulture was improved and encouraged to provide the empire with wine. At that time
Valpolicella began to become a renowned place for vacation. Indeed, the lords of Verona used to
build their countryside homes in this charming land with plenty of natural beauty. Also, Dante
Alighieri, the major Italian poet of the Late Middle Ages, decided to reside in Valpolicella. Nowadays,
this land of wine, charm, and tradition beloved by many tourists for its landscapes covered with
olive and cherry trees as well as vines.
Today you will get the chance to visit the villa where Dante’ son, Pietro, came to love the beauty of
the city and its countryside, and so decided to remain in the area, purchasing the Casal dei Ronchi
in Gargagnago estate (possession) in the heart of the historic Valpolicella region in 1353. Twentyone
generations later, both house and estate still belong to Dante’s direct descendants, the
Counts Serego Alighieri. Today, the Villa stands surrounded by Valpolicella vineyards, the center of
traditional farming activities associated with a large and flourishing estate.
Lunch will be at the magnificent Villa Mosconi Bertani.

September 25 – Today after breakfast you will leave Verona to move to Venice. During the way, you
will stop at Vicenza (1 hour drive from Verona). Vicenza and the surrounding countryside and hills
are particularly famous for the many works, and particularly the Villas, by Palladio. Because of the
architectonic contributions of Andrea Palladio, it was included in UNESCO’s list of world heritage
places in 1994. Vicenza’s city center is small enough to be comfortably explored on foot. The main
road through the old town is the Corso Palladio, which contains the best of the city center’s
shopping as well as most of Palladio’s urban palaces: the Basilica Palladian which massive structure
on the city’s main square called Piazza dei Signori, the Loggia del Capitanio, also made by Palladio
around 1571, but in red brick without any stucco and the Olympic theatre anchors one end of Corso
Palladio and is arguably one of Palladio’s two great masterpieces. We will visit Rotonda, which many
thinks were Palladio’s most famous. Then on to Venice and our stay at the famous Monaco et grand
Canal Hotel. www.hotelmonaco.it. Upon arriving at the hotel, we will enjoy walking around the
square and dinner at your choice of many great Venetian restaurants. Time for the “tiny fishes” so
famous in Venice and so crisp and yummy!!

September 26 – Today after breakfast, meet your private guide at the hotel lobby for a private tour
bya walk through the narrow alleys, the famous bridges and of course crossing St. Mark’s square.
Venice is worldfamous for its canals it is built on an archipelago of 118 islands formed by about
150 canals in a shallow lagoon. The islands on which the city is built are connected by about 400
bridges. In the old center, the canals serve the function of roads, and every form of transport is on
water or on foot. Venice is universally considered to be the most beautiful city in the world
because of this unusual urban design and its inestimable artistic heritage; it is included in the
heritage of humanity projects protected by UNESCO and has the highest number of visitors of any
Italian city, many of whom are foreign tourists. Along the way we will stop at a private villa,
Palazzo Malipiero, for an aperitif. The afternoon is free for you to enjoy Venice.

27 September – Our last day in Italy. Shopping or visiting more historic spots or enjoy the natural
surroundings of the Venetian lagoon on a relaxing boat trip to the picturesque islands of
Murano, Burano and Torcello. On Murano you can watch master craftsmen create original
works of art in glass, following techniques and trade secrets which have been handed down
through the centuries.
Navigating on through the salt marshes you will reach Burano, a fishing village with brightly
colored cottages, and home of exquisite hand-made lace. Here you can sample the local fish
risotto and traditional buranei biscuits.
Just five minutes further on by boat lies the island of Torcello. Now a quiet backwater, Torcello
was once a thriving lagoon settlement and here you will rediscover the very origins of Venetian
civilization. Inside the ancient church of Santa Maria Assunta, glittering medieval mosaics evoke
the richness and importance of Torcello’s history. This afternoon we will visit the Fortuny
Showroom. www.fortuny.com, and have an aperitif. Please visit the website of the Fortuny
company to realize how many beautiful items originated with this brand. Our farewell dinner will
be together in a lovely location overlooking the Grand Canal.

The Venice Island Tour described in the itinerary is optional.
*** If you choose to arrive in Venice you may transfer by train to Verona, but private transfers
are not provided. Transfers are provided on arrival to Verona airport. We suggest and provide
information for Lufthansa through Munich. 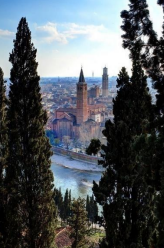 To receive a registration form, complete the form below:

Fill in the details on the form to the left, click submit  and we will send you a registration form.

Insurance information is with the registration form.